Last Wednesday (4 April 2012) @papachrismatts and I presented a session on Emotioneering at the BCS. For the folks who could not attend, here’s a brief reprise of the evening.

We started out by introducing ourselves, and then declared our two objectives for the evening:

The term “Emotioneering” is not widely used or known – the only fields in which I have come across it being video games, and product development. For the latter field, I’m the only person I know of that’s using the term –  and applying its ideas in practise. “Emotioneering” is a portmanteau word, formed from “Emotion” and “Engineering” i.e. “engineering emotions into products”.

Emotioneering is two ideas linked together:

The Neuroscience of Buyology

Martin Lindstrom (see photo, above), a Marketing Guru, spent $7million and three years on a study using FMRI and EEG brain scanners to discover what was going on inside people’s brains when they were in the process of deciding whether and what to buy. This research is detailed in his book “Buyology”.

Chris had brought along a mock EEG machine, and we proceeded to demonstrate, with the able assistance of a volunteer from the audience, how the brain scanning technique works.

Chris and I then moved on to talk about some real-worl examples of companies that have realised the power of designing products (actually, “whole products“) to evoke emotions in their customers. These examples included:

Note: As far as I know, none of these companies actually use an explicitly Emotioneering approach.

In the middle of talking about Zara and Madonna, Chris received a phone call on his mobile, which he had “inadvertently forgotten to switch off”. After chatting to the caller for a minute or two, he handed the phone to me and I continued the conversation. After perfunctorily apologising, we resumed the presentation.

How Did You Feel About That?

After the examples, we returned to ask the audience how they had felt about the interruption. They were intrigued to examine their various reactions to the “rude” and “inappropriate” phone conversation. I wonder how (more) memorable the evening will have been because of this “gag”?

Through presenting “Real Options”, Chris and Olav (Masssen) have found that people only take the ideas on board when their emotions are engaged. In other words, a strictly rational appeal does little to inspire folks to look at Real Options more closely. Chris and I presented a very simple “game” to engage folks kinaesthetically and emotionally in the Emotioneering ideas. (BTW, if you were there, how did this work for you?)

We had a brief Q&A session to recap on the idea the people do not buy on a rational basis, but rather on an emotional basis.

I then segued into the second idea linked to Emotioneering: The idea that products – particularly software products and products containing software – can be engineered to evoke specific emotions in potential purchasers, customers, users, etc..

I have long favoured Use Cases as a means to capture functional requirements or product features. Many folks like to use User Story cards to the same end. I showed a very simplistic Use Case diagram which I have adapted as a notation for Emotioneering and thus renamed to a “Feel Case diagram”. In this example we had just two “Feel Cases” for the product in question (a car). See diagram, below:

Aside: To my delight, Tom Gilb was in the audience and we all too briefly discussed the role of quantification in such “Feel Cases”.

Some folks opined afterwards that this part of the presentation had been too short. I am resolved to remedy this if I have the honour of ever presenting again on this topic.

We had a lively set of questions from the audience, and then adjourned to continue same “down the pub” (the Lyceum Tavern).  My two questions to the audience were:

In case anyone’s interested, here’s the fruits our our planning session, pre-event: 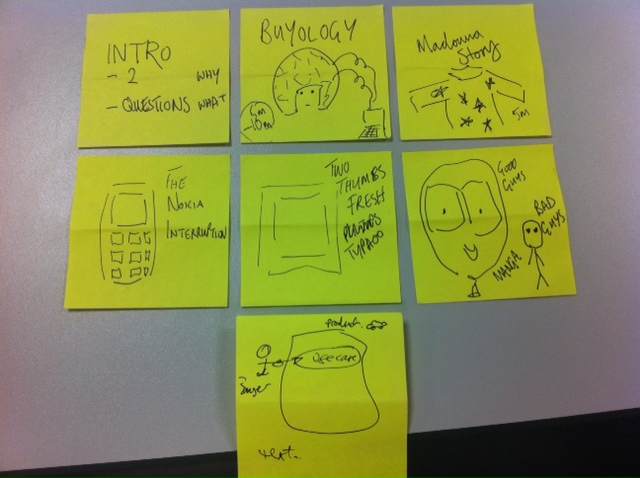