[Tl;Dr: The effectiveness of any organisation is a function of the alignment between folks’ collective beliefs and assumptions about business, and the realities of business.]

I’m not sure this post is going to tell you anything new, but I did hear recently someone appear to misunderstand one of the the basic premises of the Marshall Model. So, for the benefit of clarity…

The Marshall Model asserts that there are four basic collective mindsets in organisations. For ease of reference, the model labels these collective mindsets, in order of increasing effectiveness: Ad-hoc, Analytic, Synergistic and Chaordic.

These various collective mindsets – and by “collective” I mean shared, more or less, by everyone within a given organisation – dictate the strategies in use in that organisation. And by “strategies in use” I mean, when making every kind of decision, from the most senior manager to the lowliest worker, the approaches used to make or inform those decisions.

Put another way, in any organisation, a multitude of decisions come up every day:

And various psychological pressures conspire to ensure any one person’s beliefs and assumptions remain “congruent” with the collective assumptions and beliefs of the organisation as a whole (for example, nobody wants to be seen as an outsider).

Any organisations where people work together are by, their nature, complex adaptive systems.

I hope this post has served to clarify. Would you be willing to let me know whether it’s achieved that aim? And for the sake of further clarity, I’m happy to address any and all questions that this post might bring to mind.

When we’re hiring, why not invite candidates to actively demonstrate the core capabilities that our organisation, group, or team, needs?

Asides: How often do hiring managers know what core capabilities the organisation, group or team needs? How often are they capable of recognising and assessing candidates on those capabilities? And how aware are they of the impact the prevailing system conditions (the way the work works) has on a candidate’s ability to apply their capabilities, should they be hired?

We Want to See Jugglers Juggle

Under this premise, the ideal candidate would open the interview conversation with

“Hi there, what would you like to have happen, here and now, today?”

Or more directly/explicitly (at the risk of alienating the uninitiated hiring manager),

“Hi there, what needs do you have of this interview, that I might be able to attend to, here and now, today?”

“Well, as we’re hiring for [e.g.] coders at the moment, I need to understand how capable you would be in that role if you joined us. Can you suggest some ways in which you might be able to address that need, here and now, today?”

I guess you’d say that the preceding dialogue is, however, most unlikely. Most candidates will not be seeking to understand the hiring manager’s needs, nor will they know how acceptable – or unacceptable – such an opening gambit might be. Much more likely, they’ll play safe and let the hiring manager lead them through the interview conversation.

So, until the world changes and conversations of the kind I’ve illustrated become the norm, the hiring manager may have to prompt the candidate, and reframe the conversation at the beginning, to open the door, so to speak. Here’s a modified opening exploring this approach:

“We believe that attending to folks’ needs is a core capability we absolutely have to hire for in all our candidates. I’d like to experience you demonstrating your capability in that area.”

“As we’re hiring for [e.g.] coders at the moment, I have a need to understand how capable you would be in that role if you joined us. Can you suggest some ways in which you might be able help me understand your coding abilities, here and now, today?”

If we focus explicitly on the capability to attend to folks’ needs, we might improve our chances of actually making job offers to candidates that have this capability. Surely this is the outcome we seek?

The Antimatter Principle is “the only principle we need for becoming wildly effective at collaborative knowledge work.”

Over the years, I’ve blogged about a wide variety of the deep implications, and impacts, stemming from the application of this principle.

[Tl;Dr: Is it more, or less, effective for coaches, etc. to have technical (non-coaching) abilities?]

Over the years I’ve heard every kind of opinion on whether technical expertise is an asset or liability for coaches, Scrum Masters, and the like. Some folks, mainly executives, have sworn they would never hire a Coach or Scrum Master with technical expertise. Others, mainly coaches and Scrum Masters, have held much the opposite opinion. Those being coached have rarely expressed an opinion (although I suspect that’s because they don’t get asked, or think it won’t count, and not because they’re indifferent on the subject).

Personally, I tend to the opinion that, if it were down to me, I’d look for folks with excellent and demonstrable coaching skills, and not worry about the presence or absence of technical abilities unless they seemed intrusive and likely to interfere with the coaching dynamic. I recognise the argument that technical people lend more credibility to like-minded (i.e. technically capable) coaches because they find it easier to respect and identify with such folks. I also believe this argument to be a red herring, at least in the case where the coach or Scrum Master is effective and capable in the Coaching or Scrum Mastering skill-sets.

This is probably a good place to mention the Inner Game, and the suggestion by one of its founders, Sir John Whitmore, that “technical” knowledge and experience is a decided handicap for coaches and the coached, alike. In his book “Coaching For Performance” he tells several stories about this phenomenon, in particular that of the tennis group who, deprived of their regular tennis coach (and tennis expert) improved much more quickly under a substitute coach (with much coaching and skiing experience but no tennis experience).

Given that opinions on this topic seem all over the map, and many (mainly fruitless) discussions continue, I wonder if you have any experiences you’d be willing to share here?

The One Perfect Way to Develop Software

[Tl;Dr: Being a Master of the perfect way to develop software is more of a handicap than an asset.]

Let’s imagine you’ve received a Matrix-style download of all the knowledge and skills necessary for Mastery of the perfect way to develop software. And you’ve applied this knowledge, and honed the skills, in several or many software development endeavours. And have the results to prove it.

Then you join a new-to-you organisation, and a new-to-you team, where of course you want to share your profound, highly valuable insights, capabilities, knowledge and skills with your peers, with a view to you all basking in the sweet success of the One Perfect Way.

Setting aside secondary issues such as the probability that there is no ONE perfect way, and that software development per se is maybe not what our customers are really interested in, what could possibly go wrong?

I’ll leave this question hanging. If I receive some expressions of interest, I propose to return to it in a future post. 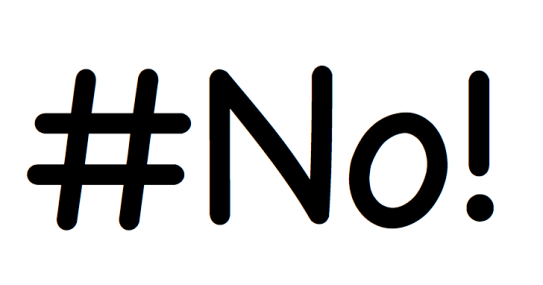 [Tl;Dr: #No… hashtags are aspirational, not didactic.]

I seem to have been labouring under the misapprehension that most folks in the Twitter software and product development communities have come to understand the mode of use of the various #No… hashtags we see regularly these days. Particularly with the widespread exposure of the mother of them all: #NoEstimates.

(Note: I use the #NoTesting hashtag in a couple of the examples, below, mainly because recent discussions thereon have suggested to me a need for this post.

For me, #No… hashtags are a short invitation to interested folks to think again about what, often, are near-autonomic responses. For example, I regard each occurrence of the #NoEstimates hashtag as an invitation to ponder whether, in each case, estimates are giving us value and meeting folks’ needs (in a relatively effective way). An invitation to checkpoint ourselves, and to discuss whether we are just us going-through-the motions without thinking too much about the role of estimates – and estimating – in any particular situation.

Also, I see #No… hashtags as being intended as aspirational: Articulating or labelling a future state where things could be different. Aspiring to change.

For example, I use #NoTesting to advertise my aspirations for a world of development where testing is no longer the chosen path to quality, replaced by other means for more economically delivering products, etc., with agreed levels of quality. So, in that case, #NoTesting really does advertise my aspiration for an end to testing – which I see as hugely expensive and wasteful compared to other, less well-known means – but NOT at the expense of product quality. It also implies – easy to miss, I guess – a responsible, calm, controlled transition from todays’ approaches to that aspirational future state.

And yes, too, #No… hashtags are confrontational. They invite us to challenge ourselves and our entrenched beliefs. To consider change, and its implications. And that’s often uncomfortable, at the very least. Particularly when the topic challenges folks’ self-image, or seems to threaten their accumulated wisdom, reputation and experience, or their livelihoods. I hope we can all see these things in the spirit of mutual exploration, rather than as an opportunity for reiterating entrenched positions and protecting the status quo.

“[#No… Hashtags are] the social media equivalent of poking people with a stick.”

When I use #No… hashtags, I’m being metaphorical rather than literal. Some folks may not understand this and get upset, by taking them literally. For my part, I believe that’s on them.

For example, with the #NoTesting hashtag, I have had some folks assume that I’m advocating abandoning any concern for the quality of e.g. a product under development. This is not my position. Although denying it seems only to inflame the situation once folks have got their teeth clamped on that particular bone. I guess their assumptions stem from not having knowledge of other means to quality.

In using the #NoTesting hashtag, I’m basically saying “under some circumstances, maybe there are other, more effective means to meet folks needs re: product quality than the default strategy most use today (i.e. testing)”. “How about we talk about those various circumstances, and means?” In this way, #No… hashtags are a metaphor for “would you be willing to think again, and maybe join the search for more effective means, and the contexts in which they might bring benefits?”

Would you be willing to join me in embracing the #No… hashtag modality, and take each occurrence as an opportunity for a productive and relationship-building mutual exploration of a topic?