In a post last year, I wrote about the nature of product development, describing its essence thus:

Product development is fundamentally an interactive social process. We might imagine a randori situation (freestyle Aikido training) with a uke (receiver) and nage (thrower), each attempting moves and countermoves to try to defeat the other. Product development is thus a process of continuous adaptation to events, of give and take, simultaneous synthesis and dissolution. While we try to express our organising intent in the product, entropy resists us and seeks to countervail our intent. Appreciating this dynamic interplay between organising intent and entropy is essential to understanding the fundamental nature of product development.”

I suspect some folks, reading this through a certain frame, might interpret “entropy” to mean complexity, chaos, or complicatedness. And therefore, interpret my description of product development as essentially being about reducing complexity, avoiding complicatedness, or otherwise attempting to impose some order upon chaos.

This was not my meaning. I chose the word entropy carefully, although not, perhaps, carefully enough.

“Entropy: A measure of disorder in the universe.”

My frame for this choice was e.g. “the heat death of the universe”, and the widely-known quote, re the Second Law of Thermodynamics:

“The entropy of the universe tends to a maximum.”

It’s been my experience that the entropy of a software-intensive product development effort also tends to a maximum. And our task, if we wish to actually deliver something useful, is to recognise this and to find an accommodation to this “Law”. 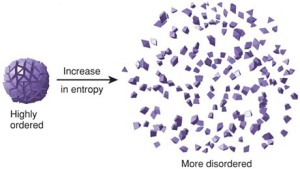 Anywho, let’s not get hung up on the term.

My intent was to convey the idea that, in product development as much as in war, Friktion and the Fog of War both serve to frustrate the best laid plans of organising intent. Indeed, Clausewitz invented the term Friktion to describe the “resistant medium” in which war – and business – must operate.

However, Clausewitz suggests we tackle – or offset – Friktion through acts of willpower. Some business books have referred to this as “Grit”.

I’m a Lover, Not a Fighter

Here, I beg to differ. I’m much more of the opinion that, as with Aikido’s uke and nage, we would do better to learn to accommodate ourselves to Friktion (a.k.a. entropy). To embrace it, to walk with it, care for it, engage with it, and ultimately to dance with it. To regards it an asset. And yes, to love it.

“When the wind of change blows, some build walls, others, windmills.”

There’s a point in the book “Ender’s Game” where Ender The Genocide, having eradicated humanity’s implacable foe (the Formic race), explains: