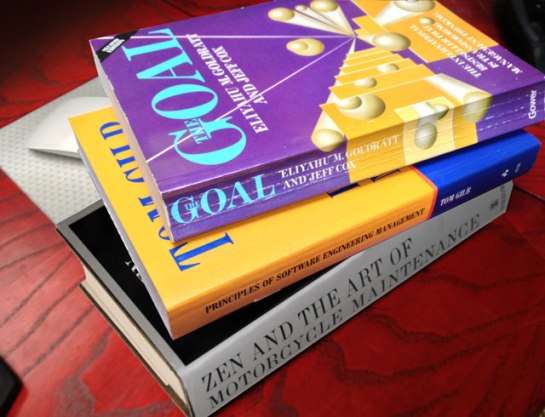 I like books. You may have noticed I read some, and I generally learn much from doing so. Well, actually that’s not really true. I don’t learn much. I fact, I hardly learn anything at all.

Rather, I find many ideas. And more specifically, parts of ideas. Fragments. Snippets. Crumbs. Slivers. My brain then somehow weaves these splinters together into more concrete, joined-up ideas. Things like covalence, emotioneering, FlowChain, Javelin, and so on. The words “synergy” and “synthesis” spring to mind.

Aside: I just wanted to mention that I haven’t bought a dead-tree book for at least two years. And it seems unlikely I ever will again.

That being said, I’m fairly sure that folks can learn things from books, or at least gather some fragments of some ideas which might prove useful. Although I do accept that some folks have a “learning style” at odds with book-learning.

“People who ‘read little’ are ripe for becoming process zealots because they only learn one thing & believe it is everything.”

Many folks have written copious amounts about the pros (and cons) of book-learning as it relates to software people. See, for example,

@flowchainsensei ‘Programmers Don’t Read Books — But You Should’ http://t.co/fRhWBN6XNK – @codinghorror

This post is not so much an addition to the oeuvre, but rather an attempt to recommend just three books – as a starting point for software folks who may not have had the opportunity or motivation to begin their reading on the subject, as yet. This post is also in the way of thanks to all the folks who responded to my recent tweet:

“Which three books would you choose to recommend to software folks who have read very little, yet want to improve?“

Note: My choices here are tempered by the nature of my imagined ‘audience’; not just programmers, coders and testers, but everyone involved in software and product development. I very much agree with the sentiment expressed by Jim Benson:

“If we in software only read books about software, we will build crappy software.”

Given that software development and product development – are disciplines largely, if not entirely, about people; people working together, people collaborating, people learning together, etc. – maybe I should also mention some people-related books too.

Many of the folks who so kindly responded to my tweeted question seem to have answered in the context of programmers. I’ve consolidated the many recommendations into the following list:

Excluding the titles which I have more or less arbitrarily included in the above “programmers’ books” category, here’s a list of the other books folks recommended (no clear Top Three emerged):

Any books you feel we missed out? Please do mention them via the comments.