Are You Brave Enough? 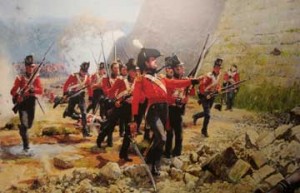 “When Greg first met Butch Johnson, he was deeply impressed by Butch’s insight into the way organizations and leaders behave.

Very few top managers understand their own psychological limit, how it pervades the organization, and how they should change their profile.”

For me, one word sums up this idea of “psychological limit” better than any other: Cojones.

In many of my clients over the years, I have observed that a key limitation (a.k.a. constraint) on their rightshifting journey has been their cojones, or more exactly their lack of thereof. This is what Ray Immelman is writing about in the above passage (the book explains the idea in greater depth). In a nutshell, he advises:

“Strong tribal leaders have capable mentors whose psychological limits exceed their own.”

There’s another word, not these days in widespread use, which also speaks to this issue: mettle.

met·tle/ˈmetl/
Noun:
1. A person’s ability to cope well with difficulties or to face a demanding situation in a spirited and resilient way.
2. Courage and fortitude: a man of mettle.
3. Character, disposition or temperament: a man of fine mettle.

The word has its root in the Greek, “metal”, with its connotation of mining, and digging deep, as well as the stuff of which we are made.

From my perspective as an organisational therapist, I see organisations failing to step up and be all they can be, through a lack of organisational mettle. It’s often because things are too comfortable, too regular, with folks settled into a routine which seems to meet their personal and individual needs – at least, after a fashion.

I suspect it was…the old story of the implacable necessity of a man having honour within his own natural spirit. A man cannot live and temper his mettle without such honour. There is deep in him a sense of the heroic quest; and our modern way of life, with its emphasis on security, its distrust of the unknown and its elevation of abstract collective values has repressed the heroic impulse to a degree that may produce the most dangerous consequences.

Where does mettle come from? Similar to my recent question regarding integrity – is mettle innate, or can it be learned, developed, expanded? And what is at the heart of organisational mettle?

“The true test of one’s mettle is how many times [or how long] you will try before you give up.”

For an insight into the source of mettle, we might consider the closely associated idea of courage. Courage comes – literally and metaphorically – from cœur (French) or heart.

Chinese and eastern traditions see courage as deriving from love. I find comfort in this.

What would you, your team, your organisation be capable of with limitless courage? Or even just a little more? How is your mettle related to the results you’re presently capable of achieving?

I’m minded to caution – myself included – against the temptation to rush to judgement on individuals or organisations. Saying – or even thinking – “these folks need more courage” seems like it might be unhelpful from the perspective of therapy and e.g. nonviolent communication. Better to ask “how do you feel about the need for courage, the role of mettle, the psychological limits round here?”

Or, from an appreciative enquiry perspective:

“How much courage do folks here have already? How can we use it better? Do we need to build and develop it further, do we need more courage (in order to take us where we’d like to go)?”

Or, the Miracle Question from Solution Focused Brief Therapy:

“So, when you wake up tomorrow morning, what might be the small change, the thing you first notice, that will make you say to yourself, ‘Wow, something must have happened—we have broken through our psychological limits!’”?”

“What would you like to have happen? Is mettle necessary to that?”

I feel it’s a topic worthy of inquiry and discussion. And worthy of an open mind, too.

“The bitterest tears shed over graves are for words left unsaid and deeds left undone.”

How about you? How do you feel about the need for courage, the role of mettle and the issue of psychological limits in organisational effectiveness? In your organisation? In your own life?