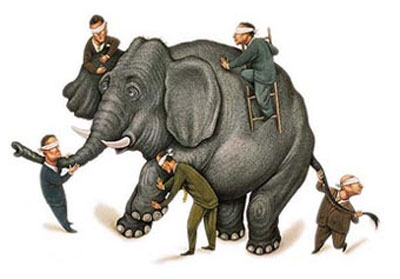 For all the angst and discussion around how to make organisations, teams and people more productive, we might be forgiven for thinking that the idea of “productivity” was commonly understood and agreed.

However, this is not so.

For example, classical economics has a markedly different definition than does Theory of Constraints (TOC). And if you ask someone – in particular managers demanding “higher productivity” – for an operational definition, you may get a blank look, or other definitions again.

“An operational definition is a procedure agreed upon for translation of a concept into measurement of some kind.”

“There is no true value of any characteristic, state, or condition that is defined in terms of measurement or observation. Change of procedure for measurement (change of operational definition) or observation produces a new number.”

Here are just some (differing) definitions I found on the Web:

So, what is productivity? I’m confused now. Are you?

When I’m talking about productivity, for example in my presentations and workshops on organisational effectiveness and Rightshifting, I have a particular definition clearly in mind:

~ Jonah, in The Goal by Eliyahu M Goldratt

Personally, although fully agreeing with Goldratt on this definition, I find it’s hard to use in an explanation or discussion, especially with folks unfamiliar with Goldratt’s work. As the Jonah character goes on to say:

“Productivity is a meaningless concept unless the folks in an organisation understand what their goal is.”

And the book (The Goal) takes a whole book to explain how to discover the Goal in any given organisation.

Aside: This definition of productivity makes it closely congruent with “organisational effectiveness”. See this chart: 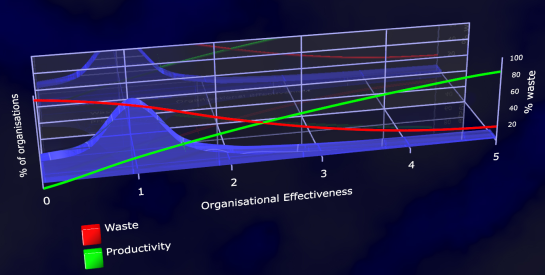 So for the purposes of discussion, I sometimes use another definition, derived from the TOC formula:

(a.k.a. the rate at which the system generates money through sales).

Operating Expenses = all the money the [organisation] spends in order to turn inventory into throughput.

So, my simpler definition is:

Productivity is how much it costs an organisation to move one unit (measurable step) closer to its goal (whatever its goal may be – for example, getting a particular product to market).

Note: “Cost” here, and below, is in the most general of terms, maybe a composite function of the Five Capitals, and not necessarily just in financial terms e.g. money or cash.

Or, as an (almost) operational definition, where the goal is (improving) organisational effectiveness:

Cost to move the organisation one unit (say, 0.1 of a rightshifting index point) to the right on the effectiveness axis of the Rightshifting chart.

Note: This is much the same as the Rightshifting measure named “Drag”.

Productivity is a Property of the System

By which I mean, that productivity is never a property of an individual or team, but of the whole system of work within which individuals and teams do their work. This is often referred-to as Deming’s 95% rule.

Taiichi Ohno said “People don’t go to Toyota to ‘work’ they go there to ‘think’”.

If we take this at face value, then The Goal of Toyota, at least from Ohno’s point of view, was to get its people to ‘think’ (which I take to mean, study the system – the way the work works – and improve it).

So next time, and every time, the topic – or issue – of productivity comes up, think “Are we all on the same page about what this word actually means?”

Some discussion, to ensure everyone is talking about the same thing, pays major dividends. And, yes, increases productivity.

Since I first wrote this post, it occurs to me that some readers may infer that I believe productivity is an “unalloyed good thing”. Inasmuch as productivity meets the needs of some folks in an organisation, we might choose to accept this at face value. Personally, I reject worshiping at the altar of productivity, and chooser rather to appreciate that a blind pursuit of productivity at the expense of folks’ wider needs can do much more harm than good.